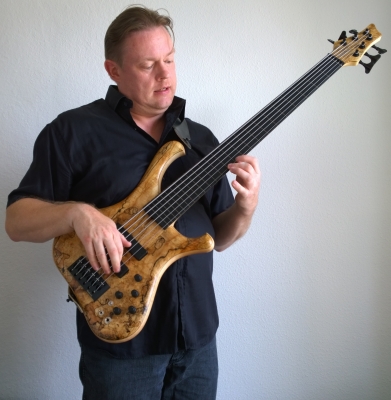 I started playing bass when I was 13 years old. I took lessons at the local music school for 3 years, and I also had private lessons. I played in bands who played rock, hard rock, funk and pop. My taste was, and still is, very diverse.

In 1992 I started playing in Zap!, witch transformed into Friends and Resistance. In 1995 Resistance transformed into Shane, a rock band that existed until 1999. Shane realesed only one track "Worlds Within" on a compilation album distibuted with the danish heavy metal magazine "Metalized".

The Moose Project (TMP) started in 1994 in Copenhagen, Denmark. It was the result of Kenneth Jensen (drums), Massimo Fiorentino (keys) and Thomas Hjorth (guitar) forming a band called Confusion. They soon found me as a bassplayer. Together we wrote material witch blended jazz, funk and rock to a lethal fusion mixture. T.M.P. played wellknown fusion pieces as well as our own compositions. (Visit keyboardist Massimo Fiorentino at: www.interiority.com).

In 1999 I founded Chrome Shift with Otto Schütt(g) - a long time buddy back from the days I started to play, and from the days in Zap!, Friends and Resistance. Chrome Shift plays original material influenced by Dream Theater and King's X. The band released the record "Ripples In Time" in spring 2003 on DVS Records.

In November 1999 Tommy Wortmann and I formed what became to be the fusion band "Epifani" in Copenhagen. The band played original material and the project ended in autumn 2004.

In summer and autumn 2004 I was the bassplayer stand-in in Alex Puddu and the Butterfly Collectors and later became a regular member of the band until sometime in 2005.

Longing to play jazz, I started playing with guitarist Christian Bak in the spring of 2007. Later pianist Carsten Svanberg joined.

In March 2016 I joined the metal band Posterity